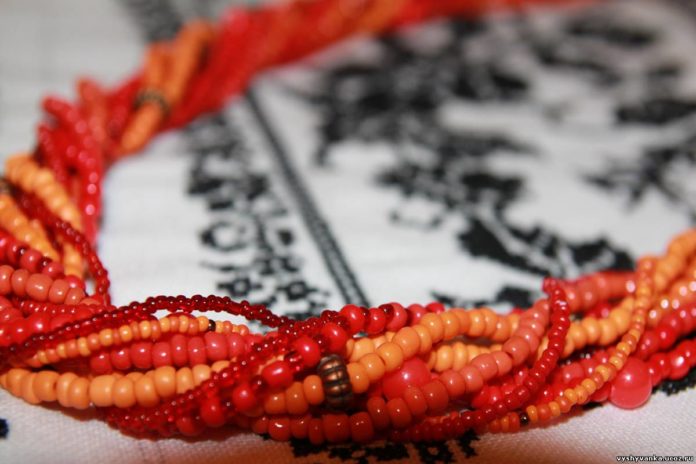 Beaded necklaces (namysto) are one of the oldest forms of women’s ornaments in Ukraine. They have many names – monysto, busy, korali – testifying to their long history and important role in Ukrainian culture. They are not just adornments, but also carried deep symbolic significance.

Traditionally, there are two types of neck jewelry: a string of beads called namysto, and coins called dukach. Combined together, they form a monysto or sometimes widely refereed to as namysto. Common materials are metals, stones (with corals often used to symbolize youth and health), wood, leather, glass, etc. They were generally protective or informative, for instance, they could tell how wealthy the family was as since six strings of coral beads could cost as much as a pair of oxen).

Necklaces (namysto) have been worn by Ukrainian women for centuries, which means that there is a wide variety of this decorative element. Throughout its history, beads have varied in colour, form, material and the way they were worn. The earliest neck ornaments were made of pits and seeds taken from vegetables, fruit and grains and were subsequently replaced by stone, metal and glass beads. Later necklaces were crafted from expensive natural materials such as coral, amber, pearls, glass, smalt and garnets. Only wealthy bourgeois women could afford the latter.

Neck jewelry has been worn differently throughout the years. First of all, Ukrainian women did not leave home without covering their neck with some kind of ornament – it was akin to going out naked! Be it a festive day, a celebration, a Sunday or a normal working day, a lady’s neck was always adorned with rows of elaborate beads. Necklaces were also amulets, protecting her from evil spirits and bad people.

A woman’s social status could easily be determined by her neck ornaments. The more beads and the more rows she had around her neck, the more prosperous she was. The poorest wore 2-3 rows of coral, while the rich – 10 to15.

Ancient versions of women’s necklaces were made of brass. They resembled small spiral tubes, along which various coins (for wealthier ladies) or crosses (named “cross zgardy”) were strung in rows. There were also many varieties of metal beads:

In regions around Kyiv, in Volyn and the Carpathian region, women wore necklaces made of real amber as these semi-precious stones were mined in the areas. It is believed that amber brings health and makes a woman’s skin look smoother and more attractive. Large round beads were shaped with knives and strung on a long thread. Often such large amber beads were worn with strings of coral.

Coral necklaces were the most popular in Ukraine. Rows of stunning red coral worn over a Ukrainian embroidered shirt present an incredibly beautiful and sophisticated image. The coral tradition has been passed on through the centuries and is preserved to this day. Pink beads with a greyish or reddish tinge were strung on a silk cord in a certain order: large beads were placed in the centre and smaller ones at the ends. Our ancestors believed that red coral necklace were endowed with magical properties: bright red beads meant that the woman was strong and healthy, but dull and greyish ones warned of disease.

Every girl dreamed of “decorated patsyorky”. This was the name given to very expensive hand-painted glass beads that were brought from distant Venice. Venetian master craftsmen have kept the secret of Murano glass to this time, thus preserving its renown and value. Pearls and shell necklaces were also very expensive as they were imported from distant lands. Glass jewelry and pearls were mostly worn by wealthy ladies.

Woven strings of biser were and still are very popular among Ukrainian women. Originally, these beads were very presious as they were brought from Murano, but when the Czech Republic started producing them massively, every woman or girl could afford to buy some “tsyatky” (as a biser necklaces are still called in Bukovyna).

All in all, neck ornaments were and still are an integral part of the traditional Ukrainian costume and modern-day fashion. 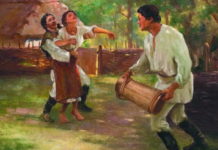