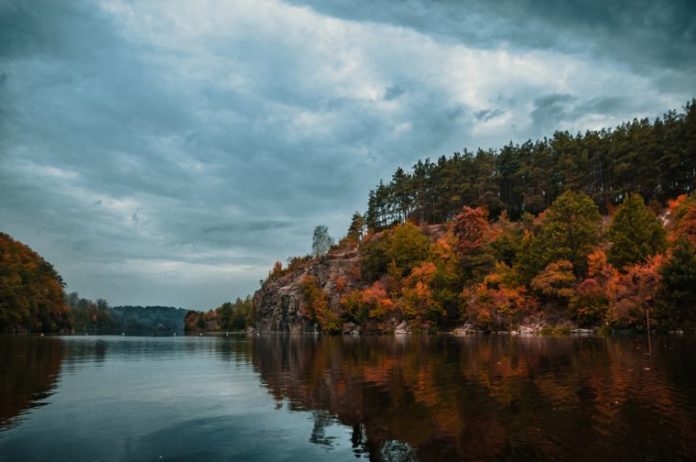 Located in about 1,5-hour drive from Kyiv, Korostyshiv is a go-to place for many photographers in Ukraine. Two artificial canyons hidden from the public eye among the huge pine forest provide an excellent location for pictures. In recent years, Korostyshiv has also become popular among rock climbers, divers, hikers and other fans of active leisure, reports Destinations.

Korostyshiv canyons were formed artificially, so when referring to the area both ‘canyon’ and ‘quarry’ are suitable for usage. History of the place began in the 1850s with the founding of a granite deposit. Back in the day, workers extracted rocks used mainly for construction works like labradorite, gabbro and gray granite. The latter is easily recognized in various monuments all over Ukraine, so no wonder that Korostyshiv has a reputation of the “capital of monument manufacture”.

The quarry had an important role during the WWII — during the period of Nazi occupation in 1941-1943, soldiers tried to resume the work of the deposit, which halted after the war outbreak. Little did they know that in late 1941 a 17-year old O. Zhyliaiev had organized an underground resistance movement right under their noses in that very quarry. The group cooperated with the local population, gathered and transported medicine to the Soviet partisans and prevented convoys of captured youth leaving for the Third Reich. After the war ended, the works in Korostyshiv quarry began again on a large scale. For instance, extracted granite was used for rebuilding Kyiv that was completely ruined after the bombings.

While it may seem that Korostyshiv quarry refers to just one spot, it’s actually not very precise. There are two canyons on the territory of Korostyshiv that both belong to the lovely picturesque area. The first one, main canyon, is quite spacious and is located among the huge pine forest. It is more easily reachable from the highway Kyiv-Chop, that’s why tourists are scattered around the area no matter the time of the day. The canyon’s territory isn’t equipped with gazebos or a tent town and there are no food stalls either. This is the wild area completely ruled by nature, so make sure you pack everything you need beforehand.

The second canyon in Korostyshiv is called The Big Rock and is relatively small compared to the main part of the quarry. However, it’s just as picturesque thanks to the abundance of trees, sleek granite lined and a small lake. The Big Rock is more equipped with essential things for hikers: for instance, there’s a tent town (you have to bring your own tents), there’s a small shop with food and BBQ nearby.

Moreover, this canyon is a center of active leisure in the area — the local school of rock climbing uses the territory as its classroom, divers regularly hold trainings in the lake’s waters and tourists enjoy sup boarding and stand-up paddleboarding. The area is highly visited at any time of the year but photographers usually choose mid-autumn to capture the beautiful foliage of orange, yellow, green and brown.

How to Get There

Korostyshiv is easily reachable via Kyiv-Chop highway. To get to the main canyon, head in the direction of Korostyshiv city and turn on the city road T0602. You will see a turnoff to the forest on your left in about a minute or two — that’s the cue. The Big Rock is located a bit further: follow Kyiv-Zhytomyr highway in the direction of Hovohorodetske village. Then head for Horodske village and turn left on the Y-road.

Public transport options are a bit scarce to get to Korostyshiv. One way is to hop on the bus Kyiv-Korostyshiv that departs from Dacha bus station near the Zhytomyrska metro station. The schedule may vary, so it’s better to call or look up the timetable beforehand. 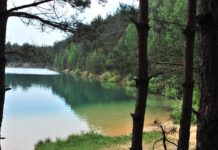 Most beautiful lakes in Ukraine

10 must visit places in Ukraine