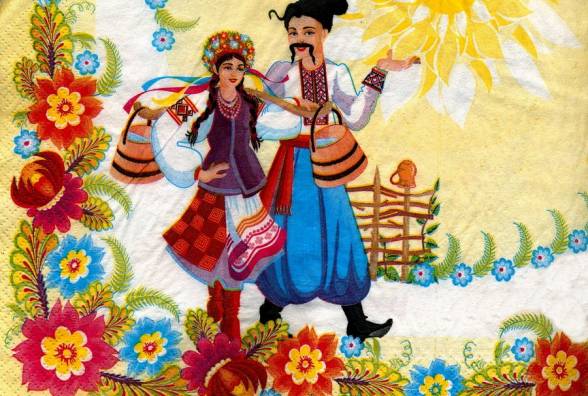 Ukraine has always been famous for it´s songs. And these aren´t just words, these are facts. Yup, ethnographers gathered around 200 000 Ukrainian folk songs, and this is much more than other nations have! The best folklore songs were always passed down from one generation to another. They are performed both during all kinds of feasts and during revolutions. Let us show you 15 Ukrainian songs that have already became favourite ones.

The author of this song is considered to be Ivan Nehrebezkyy who was born in Poltava region. “Розпрягайте, хлопці, коні” was a marching song of Nestor Makhno’s troops. Makhno was an anarchist, so Nehrebezky was exiled to Mahadan for 25 years.

We don’t know who composed this love song and when it was, but there is no ukrainian celebration where this song isn`t sung.

There is no Ukrainian who doesn`t know about this song. Song is based on a dialog between Halya and her lover Ivan, who begs her for water and craves her attention. This folk song was performed by Ukrainian artists like Taisiya Povaliy, Khrystyna Soloviy, Trio “Marenichi” and “Vopli Vidopliasova”

`Їхав козак за Дунай` (`Behind the Danube, a Cossack Rode`)

The author Semen Klimovsky is considered to be a Cossack, philosopher and poet. It is possible that he wrote this song after the unsuccessful attacks on Turkey. The song gained popularity in the middle of the XVIII century, and after some time it was rewritten by Russian poets and composers, who created a bunch of different variations. Neither Russian nor French version ` Їхав козак за Дунай ` sounds as authentic and sincere as Ukrainian one.

This is another song that is sung on every feast. According to history, it was first mentioned in 1897. At that time, `Ти ж мене підманула` was classified as a “trindychok” which were humorous youths` songs.

`Ой на горі та й женці жнуть` is a Cossack folk song, which became the “Zaporozhian March”. Probably, the song appeared in the second half of the XVII century. The song is connected to great Ukrainian hetmans Mykhailo Doroshenko and Petro Konashevich-Sagaidachny, who were significant historical personalities.

A folk recruits song in which the girl is deeply upset and this is not because of her mother beating her with a birch twig, but because of the difficult fate of her beloved recruit, who is a soldier. In the XIX century men was in the army for 25 years, so it is not surprising why she wants to be with her beloved as long as possible, even when her mother is against it.

This is a simple and humorous Ukrainian song. The composer is Volodymyr Konoshchenko. The song has witty and funny lyrics, that are simple at the same time.

A beautiful song about love for a charming Ukrainian woman. Recently, historians came across the probable author of this folk hit: Konstantin Dumitrashko, a poet of the mid-nineteenth century. Despite the ban on the Ukrainian language and culture at that time, he created a unique piece of art.

Ой у гаю при Дунаю (`In The Forest, Near The Danube River`)

There are two versions of this folk song, and both of them are magnificent. “Ой у гаю при Дунаю” has been popular among people since 1916. This song was performed by an actress of Ukrainian origin Milla Jovovich when she was presenting her debut album in 1994.

This song was performed by an actress of Ukrainian origin Milla Jovovich when she was presenting her debut album in 1994.

Another example of Ukrainian humor. The song is really popular among Ukrainians, but remembering the words isn`t as easy as it seems to be.

This song is a part of history and folklore traditions of Ukrainian people. It is a national treasure not only of Ukrainian, but also of Belarusian and Polish music.

It is believed that guests should be greeted and welcomed with this song. “Зеленеє жито, зелене” became widely known in a version of Oksana Bilozir`s performance and VIA “Ватра”.

Very deep and tender song that is often performed at weddings.

One of the most common Ukrainian songs. This song was considered as folk one, but recently scientists have identified the probable author of the work – Ivan Vitvitsky from Ivano-Frankivsk region. He dedicated the song to his brother, who was a Sich shooter and died in the battle for Ukraine’s independence. The song was included to the album “Our Partisans” by Taras Chubay and was performed by groups “Plach Yeremiyi” and “Skryabin”.